Last night was incredible, and I have all of you to thank. 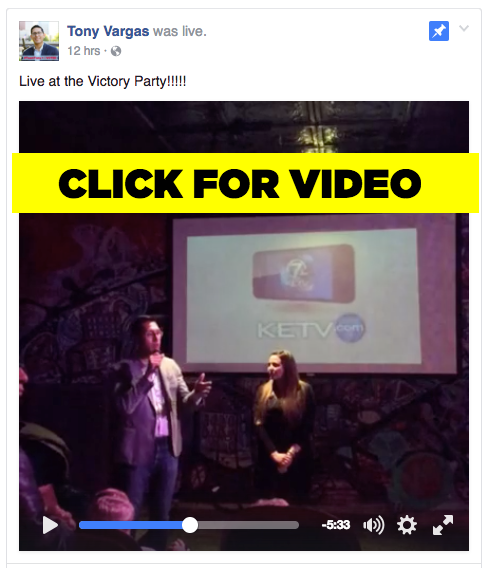 By now, you know my story: I'm the youngest son of Peruvian immigrants who came to the United States to live the American  Dream. They worked hard to create opportunities for me and my brothers to have a better life. I learned the value of community and generosity from their example and became a teacher so I could give back to my students. And last night this first generation American just became the first Latino to represent Omaha in the Nebraska Legislature -- that is opportunity.

I started this campaign to better engage and represent every part of our community, and together for the last 55 weeks we've done just that. We did it by knocking on nearly 35,000 doors and having meaningful conversations with thousands of people about their lives and their concerns and hopes for our neighborhoods in downtown and South Omaha. People saw that we cared through the hard work we put in to reach out to them, and that's why we won 11 of the 12  precincts, with 61% of the overall vote.

I have been honored to be an Omaha Public Schools Board Member for the last three years, where I have worked to make our schools stronger, safer, and more inclusive for students and teachers. I couldn't be more thrilled to continue that work in the Legislature.

To all of you who have been there to make all of this possible: Gracias.