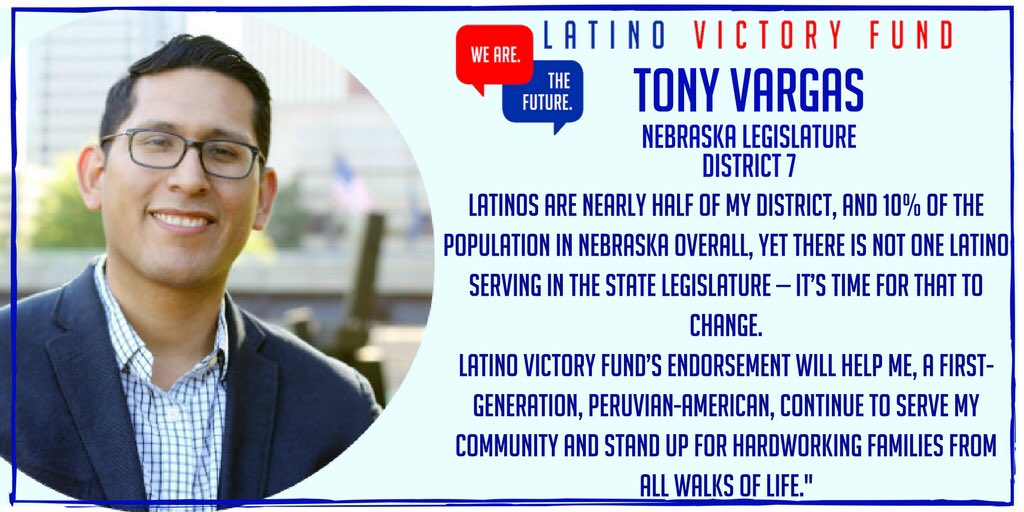 Omaha, Neb. -- The Latino Victory Fund has announced their endorsement of Tony Vargas, candidate for Legislature in Nebraska. If elected, Vargas will be the only Latino serving in the Nebraska Legislature.

“Latino Victory is proud to support a talented leader like Tony to ensure that he breaks this crucial glass ceiling for the Latino community in the State of Nebraska,” said César J. Blanco, Latino Victory interim director. “Tony is a talented, seasoned educator and public servant who has fought for his community’s well-being. He will champion the causes and issues that are important for the Latino community and for his entire district. A victory for Tony will increase the number of Latinos elected to serve in state legislatures, and this is an important step in the pathway for equal Latino representation at all levels of government.”

“Latinos are nearly half of my district and 10% of the population in the state overall, yet there is not one Latino serving in the Nebraska Legislature — it’s time for that to change. The nationwide network of support that comes with the Latino Victory Fund’s endorsement will help me, a first-generation Peruvian-American, continue to serve everyone in my community and stand up for hardworking families from all walks of life,” said Tony Vargas.

Tony Vargas is the son of Peruvian immigrants who worked in manufacturing. He began his career as a public school teacher. Since then, he has worked in the non-profit and education sectors, striving to improve the quality of education of thousands of children across the United States. Currently a member of the Omaha Public Schools Board of Education representing the communities of downtown and South Omaha, Tony serves more than 52,000 students and 86 schools across the city. In this role, he has been a tireless advocate for closing the achievement gap, addressing systemic inequities, and for increasing parent and community engagement. A first generation college student, Vargas earned his Bachelors of Arts degree at the University of Rochester and a Master’s in Education at Pace University. If elected, Tony will be the only Latino in the Nebraska Legislature.

The Latino Victory Project’s mission is to build political power within the Latino community to ensure the voices of Latinos are reflected at every level of government and in the policies that drive our nation forward. The Latino Victory Project develops leaders for public office while building a permanent base of Latino donors to support them. Partnering with leading organizations, it shapes public policy that reflects the growing influence of the Latino community while also building cross-constituency alliances that can move the country forward.